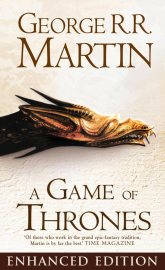 Sansa stays in her room for days weeping and shivering in grief and reliving the moment when Janos Slynt held her father down and Ser Ilyn chopped off his head. Finally, Joffrey comes for her with Sandor, Ser Arys and Ser Meryn to tell her she will attend him. She refuses initially, and Joffrey makes Sandor get her dressed. She says she wants to go home, and Joffrey says they are still to be married. She says she hates him, and Joffrey has Ser Meryn hit her. He leaves then, and Sansa bathes and dresses. Ser Meryn comes back to escort her to Joffrey. She tells him he is no true knight, but he simply does not care.

Sansa attends court, where Joffrey sits in judgment with Cersei, Varys, Petyr, and Janos. He lets them handle most of the cases, but when he intervenes, it is always to give out bloody punishments. When it is over, he comes to her with Ser Meryn and Sandor and takes her to the battlements to see the traitors’ heads. On the way, he says he will get her with child as soon as she is able, and if the child is stupid he will kill them both and get a new wife. Eddard’s head is up there, as is Septa Mordane’s and several others. There are two empty spikes for Renly and Stannis. Joffrey tells Sansa of Jaime’s capture and tells her he will raise a host and bring her Robb’s head. Sansa retorts that Robb may bring her Joffrey’s head, and he has Ser Meryn beat her again. She considers pushing Joffrey off the battlements, but Sandor kneels before her and delicately wipes the blood from her face, and the moment passes.

I think we’ll need to go line by line to appreciate just how truly shitty Sansa’s life is right now. I had actually forgotten that Sansa gets a sort of ‘reaction’ chapter in AGoT itself but I think it’s important since we get a direct response from the immediate villains of the book quickly.

He felt her brow, made her undress, and touched her all over while her bedmaid held her down.

Pedo Pycelle strikes again, huh. I’m not sure if I’m the one making this dirty or Pycelle is in fact creeping on Sansa. Given his tendencies to frolic with very young prostitutes, I suspect it is the latter though.

“I don’t want to marry you,” Sansa wailed. “You chopped off my father’s head!”

This is just a simplistic statement and sentiment that I actually laughed a little. Joffrey of course, is being an absolute little shit, but that’s par for the course by this point. I think Joffrey giving the orders to nick Ned’s head off is what actually promoted (demoted?) him from annoying little brat to ‘please-fucking-die’ status. My first response to his indirect physical abuse of Sansa was scorn – it’s like his doesn’t even have the courage to actually beat her himself. This is actually a weird response on my part since I should be disgusted that a grown man is actually beating (quite viciously from the description of things) a (barely) adolescent girl but at this point, I can’t generate the outrage for that. On the other hand, my scorn for Joffrey as a character comes from an inextinguishable furnace of rage. I might or might not have overstated that.

Hmm, this is actually an extremely insightful comment about Joffrey’s nature from an extremely unlikely source. I think this pretty much captures all there is to know about Joffrey – he wants to be feared because he was raised mostly by Cersei, who in turn was raised by Tywin who in believed that a ruler must be feared and respected. Tywin, after seeing his own father laughed at, realized that having the people’s love was pointless in the end – a rather cynical conclusion but perhaps not too far off the mark in ASOIAF. So on one side of Joffrey he has the Cersei in him demand that he show no mercy and make the people and lords fear him but he doesn’t have the life experience (or the basic human empathy (let’s be honest, despite all this explaining, the kid’s a sociopath)) to temper that with mercy nor does he have the maturity to set his own limits. Combine his warped concept of respect with basically absolute power and you have a recipe for Joffrey. Anyway, back to my main point, normally I would say that the other half of Joffrey that he got from Robert (ironically) and from Jaime (a different kind of irony) is a need to be loved. Let me explain this one (it will be long. There will be much wordage). Robert had this natural ability to make people love him, though sadly this charm somehow did not work on Cersei, or on boars. Joffrey, desperate and rife with daddy issues, now wants to be as loved as Robert was in order to prove to himself that he can be every bit the king that Robert was, though sad to say, as matters currently stand, he isn’t even a hundredth of the king Robert was. On the other hand, we have Jaime and while I don’t believe Joffrey turned out the way he is because Jaime’s genes, I think it’s worth looking at the resemblance from a more literary, story-telling point of view. Jaime’s current cynicism and almost nihilistic approach to life comes from the fact that no one appreciates what he considers his finest act (I’m grossly simplifying this, but to me, this is the gist of it). I think it’s dramatically appropriate for Joffrey’s need for love and fear to consume him in the same way that Jaime’s consumed Jaime himself.

“If you loved a traitor, you must be a traitor too,” Joffrey said.

Still, none of what I said above actually justifies shit like this. This is like Guantanamo Bay version beta.

All it would take was a shove, she told herself.

I hope we reach a point in the story where I can unreservedly say that it is a good thing that Sansa did not kill Joffrey.